What is an ultrasound machine and how it works!

What is an ultrasound machine?

Ultrasound is a technique, which is based on the emission and reception of sound waves that are located above the human ear’s ability to be perceived.

Where is Ultrasound equipment used?

The transducer is the transmitter of small impulses of high-frequency acoustic waves, inaudible to humans, which are directed to the inside of the body.

Sound waves bounce off tissues, fluids or organs, being the role of the transducer to record the changes, even if they are minimal, of sound.

A computer converts the echo recorded by the transducer into images that appear on a screen.

Ultrasound Machine is a very useful test to visualize the structure of the heart and achieve the study of its hemodynamic functioning (its ability to pump blood). It is possible to accurately diagnose cardiac, acquired or congenital conditions.

With an ultrasound, cardiac conditions can be classified according to their intensity and origin. The procedure has the same principle as other ultrasound, that is, the emission of ultrasound through the body that bounce and are recorded with the same apparatus.

For Ultrasound the Doppler technique is basic, which allows, in addition to seeing the cardiac structure, the precise speed of blood flows within the heart.

Ultrasound can be divided into two groups: with contrast and non-contrast. Generally ultrasounds are contrasting, which consists of stabilized gas microbubbles that present the resonance phenomenon, thereby increasing the signal received by the transducer.

This method makes it possible to differentiate between normal and diseased tissues. Sick tissues will be observed in a brighter shade.

Traditional cardiac ultrasound uses the transthoracic pathway, that is, the heart is analyzed through the spaces that are located between the ribs.

Cardiac ultrasound is obtained by an apparatus consisting of three basic elements:

Transducer: A transducer is a device capable of transforming or converting a certain manifestation of input energy into a different output, but of very small values in relative terms with respect to a generator.

Computer: is responsible for analyzing and managing the data obtained by the transducer, converting them into images, recording and reproducing them on the screen, as well as performing all kinds of measurements and processing data that will help us obtain the clinical diagnosis.

Display or Monitor: Essentially defined as screen to a surface, which has flat and smooth qualities designed with various materials, the function of it is to facilitate the projection of images in real time, allowing us to see what is happening inside the body at that precise moment.

When was the ultrasound machine invented?

The first ultrasound apparatus was developed in 1950 and perfected in 1980, which was when it was possible to acquire images in real time, being one of the most important factors for the wide use of ultrasonography. In 1969, ultrasound was used to indicate the presence of fluid introduced into the peritoneal cavity of corpses.

Although it is a clinical study that has many advantages, it also has some disadvantages, which are:

Sometimes ultrasound is not as accurate as expected to be.

Ultrasound equipment needs to be manipulated by a human being so that it can operate and interpret the results.

It is limited for visualization of deeper structures (patients of increased physical contexture, does not cross bone structures, and does not allow analysis of intra-articular structures).

How is an ultrasound performed?

To take an ultrasound, you usually have to follow the following steps:

First the patient lies down on a stretcher with the part of the body where the test will be uncovered. Then the health professional applies a special gel over the area where the patient will have the ultrasound done.

Once the gel has been applied, the transducer is positioned in the area of the body to be analyzed and movements begin in order to locate the organ and obtain the desired image. By means of the transducer, sound waves are sent to the body, which are so sharp that they cannot be perceived by the patient.

The transmitted waves are recorded and converted into images that are displayed on the monitor, which can be seen by the health professional at the moment they are being taken. The test can last between 30 and 60 minutes and at the end of it, the gel that was applied at the beginning must be cleaned.

Cardiac ultrasound is performed by placing the transducer on the chest wall and obtaining images through it. If the location and orientation of the transducer is changed, images of the different parts of the heart can be obtained.

The transducer can be placed in 5 different locations and orientations:

Thanks to cardiac ultrasound, physicians have been able to detect heart conditions without the need for invasive procedures that could damage the patient’s health.

Ultrasound is a sign of the progress made in science and how it benefits the health professional by helping to make a more accurate diagnosis in a shorter time, thus allowing for more ideal treatment.

Currently on the market there are two models of equipment for performing ultrasound: portable and cabinet.

We will focus on the portable equipment.

The portable ultrasound machine fulfills the same function as the cabinet, with the difference that it is an easy to transport design, which allows the physician to clearly and quickly see an ultrasound with the same characteristics of a cabinet machine in almost any location.

Portable ultrasound machines have extensive benefits for home care, emergency room assistance, or transporting a patient in an ambulance.

Another advantage of portable ultrasounds is the ease with which they can be transported to the patient’s location, especially for those who, for health reasons, cannot be moved, having the opportunity to perform the ultrasound at the patient’s bed.

The ultrasound machine’s price depends on a number of factors.

The good news is that ultrasound machines are affordable! Below is a guide to help you understand how pricing varies based on various factors.
The condition of the ultrasound machine is the second factor that influences its cost. Condition is broken down into three categories:
new, refurbished, and used.

New systems are only available from authorized distributors or manufacturers.

Refurbished ultrasound equipment is used equipment that has been thoroughly examined and reconditioned by trained experts.
These inspections are crucial because they ensure the machines operate according to the manufacturer’s specifications.
The extent of refurbishment varies, and the general process typically includes some level of cosmetic maintenance and some degree of functional refurbishment.

The price of a pre-owned ultrasound machine is typically 40-60% less than the price of a new machine.
The final condition type is “used equipment”. Used machines are sold “as is” and must be inspected by the buyer before he or she will purchase it. Taking that into account, the obvious benefit of a used system is the cost. Since no additional costs are added to the sale, used ultrasound machines are sold at the lowest possible price. 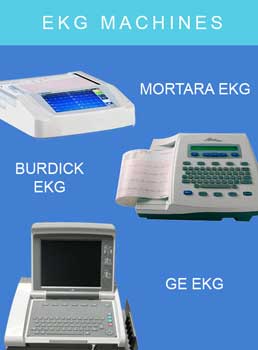 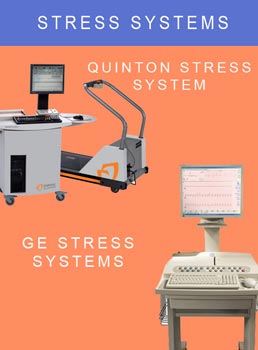 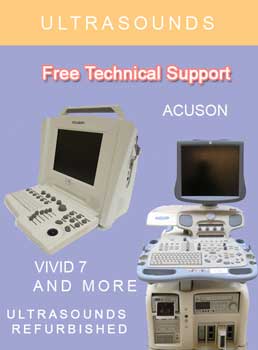